At Deriv, we have decided to become cloud-agnostic by moving a few of our services from AWS to GCP. The majority of our services and databases still run on the AWS infrastructure.

One of our main security concern was not to expose our services to the public network. Hence, we decided to handle the traffic via a private network by creating a VPN tunnel between GCP and AWS using the IPSec protocol to secure the communication channel.

The key concepts used on AWS to peer with GCP fall into two groups.

First, we have the key concepts for the site-to-site VPN used on AWS:

And then, there are the key concepts used on the GCP end to peer with AWS:

High availability of the tunnels:

High availability (HA) is a challenging and crucial aspect when building any critical infrastructure.

Challenges faced during the project live:

Our applications usually make 100+ API calls/sec and a lot of concurrent connections from GCP to the servers/services/databases hosted on AWS. We didn’t realise this would be a bottleneck.

The traffic was redirected to the GCP workloads by simply changing some DNS records on Cloudflare. But applications were working fine for some time, then the API queue would get piled up, and the applications would start slow-responding to the clients.

We have tried to troubleshoot by running a few scripts to check the connectivity, API call timing, etc. And finally, we found something related to some port limitations in the Google Cloud NAT.
We didn’t have enough time to extend our troubleshooting. Hence, we decided to rollback and test it well with the proposed fixes before giving it another try.

Improvements that resolved the bottlenecks:

The root cause of the issue was a default setting of Cloud NAT on GCP. By default, a Minimum ports per VM instance value is 64. This means that it can establish only 64 connections to the same destination IP and port.

See how Cloud NAT gateways use IP addresses and ports in more detail.

Since our GCP servers are establishing 100+ connections to the servers hosted on AWS, connections were getting refused once they reached the default 64.

Finally, we decided to increase the limit of Minimum ports per VM instance to 1,024 which helped resolve the issue. 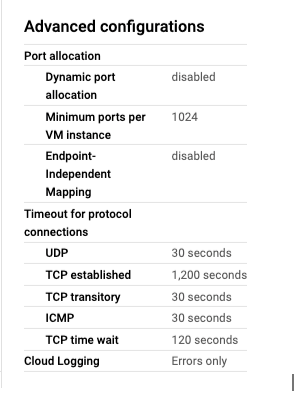 Now, our services are running on both AWS and GCP.

WebAssembly in Deriv: Trading charts Charts are among the key components of trading applications and are used in multiple Deriv apps, namely DTrader and DBot. Our main objective going forward is to build a chart library with high performance and smooth rendering. We are currently considering using CanvasKit in our